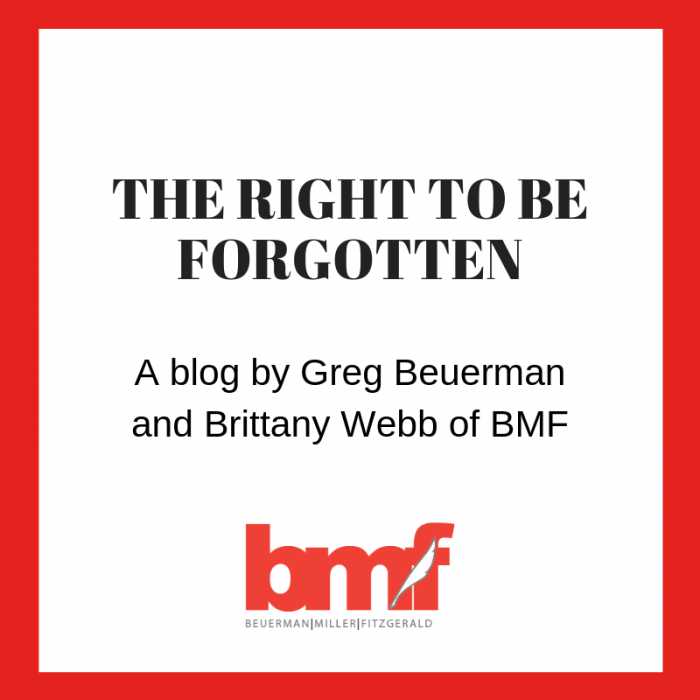 By Greg Beuerman and Brittany Webb of BMF

Thanks to the internet, the age of ready and free access to information is in full swing, making the good, the bad, and the ugly available to anyone and everyone with the tap of a button. While this is great for research, education and making informed decisions, but what happens when search results about you only show the bad and your online reputation crumbles?

The European Union’s (EU) new law, “The Right to be Forgotten”, found under Article 17 of the General Data Protection Regulation (GDPR) addresses this increasingly common problem by granting individuals the possibility of having certain types of information about themselves removed from the internet. The law states that “Individuals have the right to have personal data erased. The right is not absolute and only applies in certain circumstances.”

This law does not guarantee a “get out of jail free” card, and seems to relate to individuals only. The circumstances in which the law does not apply include “to exercise the right of freedom of expression, to comply with legal obligation, if the information is of public interest, archiving purposes of public interest, historical or scientific interest, or statistical purposes, or for the establishment or defense of legal claims.” Beyond those parameters however, thousands of Europeans have been able to have at least some aspects of their personal information and past removed from internet searches.

Some examples of successful cases resulting from the EU’s “The Right to be Forgotten” include a doctor who had been disciplined for negligence but appealed her case and served a lighter punishment. When Googling her name, she appeared on blacklisted doctor websites and filed a claim to have those links removed from the search. She ultimately won her appeal. Another success came from a businessman who requested to have information about a prior arrest and conviction removed from searches of his name, based on the fact that in the ensuing decades since his conviction he rehabilitated himself and was now above reproach. His request was granted based on the belief that those long-ago actions were no longer relevant or reflective of his life and behavior.  Conversely, another man with prior convictions was denied the right to be forgotten owing to the details of his prior conviction and its relevance for his current occupation, that he “showed no remorse for the crimes committed, and that he misled the public and the court.” Reviewing just these examples shows that success in making these appeals is challenging at best and perhaps, just as arbitrary.

So, in the near term, absent implementation of its own “Right to be Forgotten” appeals process, what does Europe’s action mean for the U.S.? Although the U.S. has not adopted any online reputation modification policies, the EU’s laws can still impact the way Americans conduct business and trade personal information. U.S. companies that conduct business in the EU, whether they are directly positioned or domiciled in the EU or just through online practices are still expected to adhere to the GDPR regulations.

While at present the “Right to be Forgotten” provision is only in effect in Europe, discussion of bringing these kinds of appeals processes to the United States is happening. Clearly there’s much to be said on all sides of this issue and it is difficult to say whether implementing such a federal law would reap positive or negative benefits for society, although clearly, some people would be better off as a result. For communication consultants and those of us in the business of reputation management and reputation rehab, such a vehicle would be a valuable tool but not likely a panacea. But for those in the legal community, HR managers or hiring professionals, the opposite may be true. Further, many detractors are concerned that a U.S. version would be a direct violation of the Freedom of Speech provision. Critics also feel that this could cause further mistrust in the value and credibility of online information platforms due to the chance that important information has been removed, in effect censored, or not included at all because it would be in violation of an individual’s right to be forgotten.

Overall, a place to start in considering such a U.S.-specific appeal process, might be an understanding that the information in question is in fact personal and should be treated as such, under the pretense that it serves no useful public purpose. Still, such a consideration in and of itself is subject to very broad interpretations which might be fluid, arbitrary or inconsistently applied.  Further, cleansing the web for appeals that might be considered would be implemented by whom and under whose jurisdiction? How to keep the removal process from becoming a political football? Could a third-party have the right to challenge proposed removals and what does that process look like? Would the appeals themselves remain private (after all the whole point of an application for removal is that the information in question doesn’t deserve a public airing?). While our friends in the EU deserve immense credit for taking such a bold (if limited) step, these questions and considerations alone, will likely ensure that U.S. policy makers will use extreme caution in moving toward even the EU’s half step as they consider your right to be forgotten.